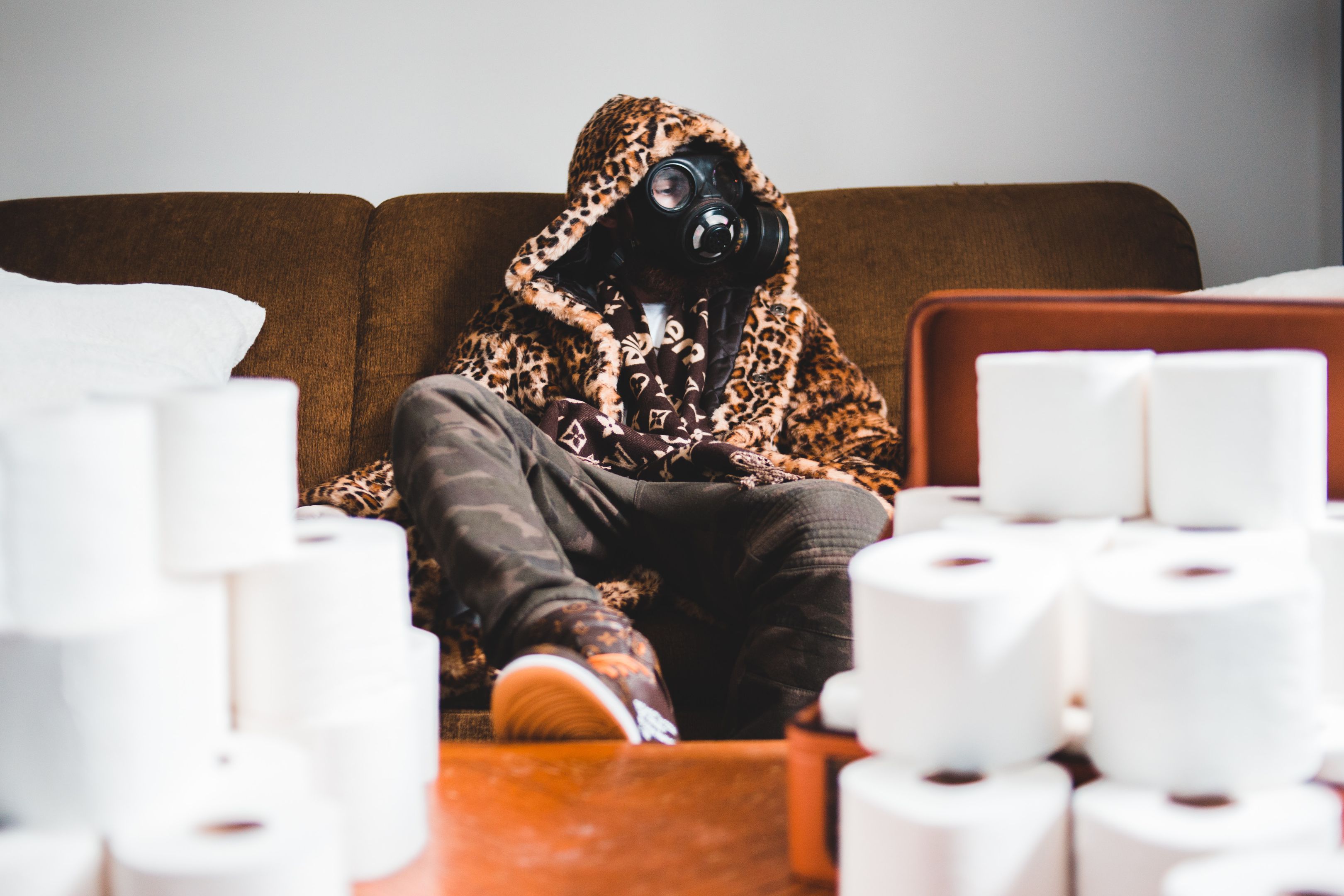 Photo by Erik Mclean on Unsplash

So in case you haven’t read the news lately, apparently there’s a pandemic going on. Whether you’re sitting on a stockpile of toiletpaper and scarfing down freeze dried peas, or pacing panickedly hoping you can still find at least a napkin to wipe your butthole with, this seems an appropriate juncture to talk about sensible preparedness, isolation and planning for volatility.

Sensible Preparedness and Cooking in the Apocalypse

Keep some canned food around, few extra jugs of water and a couple of candles in the kitchen drawer. These are the things that most of our grandparents told us and they’re part of the realm we’ll call being sensibly prepared. Ideally you’ve already been doing these things, but if you haven’t now is the time to do them slowly. Get a few cans with each grocery run, refill a few used milk jugs with clean tap water and make sure your basic supplies for adverse situations (like the power being out) are as they should be.

One of the critical things in austere times is keeping up morale. Even the marines get chocolate and gum in their MREs. Now’s a great time to indulge in the small treats you normally don’t - full fat ice cream is my go to since I usually stick to the diet varieties, but yours may be a particular candy, an old favorite tv series or even buying miniatures to paint.

When it comes to main meals aim for at least two hot, fresh meals a day, and three meals overall. Eat food you want to eat and have at least ten different meals you can prepare and rotate through to avoid meal fatigue. A good general recipe is grain + protein + veggie. That might be a pork rice bowl with broccoli, or carrot sticks and a turkey sandwich. If you need to add calories on the cheap (either money cheap or supply cheap), then you may add fats. Add some olive or canola oil to your grain, dip your veggies in full fat mayo or ranch, or melt a bit of cheese on top.

I’ve read that it takes 10 - 14 days to acclimate to drastic changes in routines, including dramatic isolation1. That’s a guideline, and for some folks, it may well differ. Our goal is to establish a new routine and build a new “normal”, because realistically speaking this will be the normal for some time.

To that end I recommend trying to build yourself a relatively consistent daily schedule. Mine looks like the following, Monday through Friday:

I still keep a rough schedule on the weekends, though much less strict. Usually exercise is replaced by working around the house and I sleep in. Meal times slide to adjust, but again, still aim for at least two good meals a day.

When you’re building a schedule you shouldn’t worry too much about aligning things to a specific time, but instead create a set of goals to accomplish during this time. This extended period of minimal distractions is either a burden or a great opportunity. If you’ve had dieting or exercise goals, the desire to learn something new, or just a backlog of books, now is your chance if you’re willing to seize it.

Volatility, whether it’s markets or life, is a really complex topic that I’ll dive into in future posts. For now, let me sum it up this way:

Volatility does not mean upwards or downwards motion, it only means the rate of change and the amount of change is greater than normal.

The market being volatile does not necessarily mean the market gaining, nor does it mean the marketing losing. Likewise with life being volatile it doesn’t mean life is going to get worse, just that things will tend to change somewhat. In the interim while things do change (and we have swings up and downwards) the reality is that people’s lives will be disrupted at least somewhat and you should try to hedge your bets to the extent possible.

For your daily life, this means realizing that the grocery store may not necessarily stock your favorite food items for the next few weeks. There may be shortages of things you once took for granted. The way you can hedge against that is by keeping extra on hand (extra supply against shortages) and having alternatives (redundancy). Buy an extra bag of your favorite chips when you go to the store for a week or two, have an idea of good alternatives that will be available.

Even though I’m using a silly example, supply and redundancy are the basic tools against volatility that we have in our arsenal which apply to things like money and work in the same way. If you’re concerned about volatility affecting your job, you might do some freelance work on the side (extra supply) and also try to earn income passively by uploading videos to skillshare (redundancy). Both of those are hedges against your hours being cut or your job being lost.

My prediction is that the volatility will continue until halfway through June. Quarantine, or some level of social distancing, will remain in effect. Some supply disruption will continue to exist. It’s likely some of the longer term disruption will surface whether that’s in the electronics industry or in luxury goods from affected regions like Spanish olives.

Most everyone is going to be fine, if very bored. Social distancing isn’t very exciting, but it’s pretty easy and our modern era makes this much less of a prison sentence then it would have been fifty years ago. Now you can order a home gym from Amazon, get it in a few days and use this time to get that shredded beach body you’ve always wanted.

The danger is that come the end of summer we’re likely to see additional waves of coronavirus, much like previous flu epidemics. When the situation breaks isn’t the time to become entirely complacent (though, use the break effectively), but instead to gear up for the next outbreak which may be a little bit worse. Volatility grows and shrinks but it never disappears entirely.